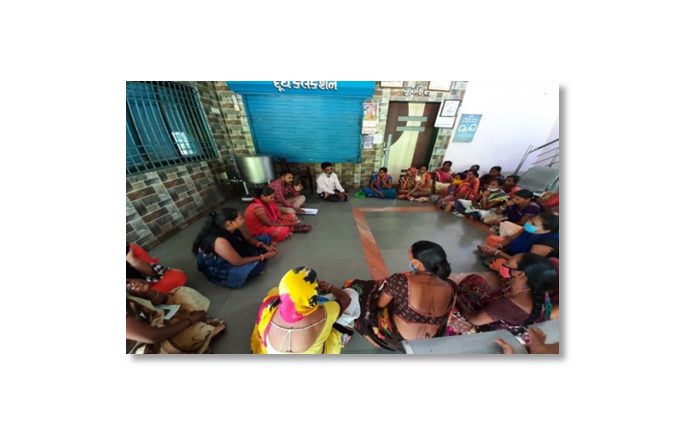 Much before the concept of Corporate Social Responsibility had evolved into its present form, Atul Ltd (Atul) has been serving society with diverse initiatives in the fields of education, health and infrastructure. Mr Kasturbhai Lalbhai, the founder of Atul and an iconic Indian industrialist, ensured complete commitment to community development and welfare in every sphere of activities he undertook. The primary reason for the establishment of Atul on September 05, 1947, within a month of independence of India, was to generate large-scale employment and consequently improve the standard of living in rural India. Mr Siddharth Lalbhai laid the foundation of Atul Rural Development Fund in 1978, with the aim to further the rich legacy of his father and bring focus to rural development projects undertaken by Atul. Over the years, due to the increasing number and scope of projects, Atul Foundation was established in 2010 as an umbrella trust of Atul. It carries out activities under six broad programs of national importance: Education, Empowerment, Health, Relief, Infrastructure, and Conservation.

Atul Foundation is an embodiment of the Purpose and Values of Atul towards serving society. It is committed to fostering sustainable socio-economic upliftment, particularly in the lives of the underprivileged through relevant programs | and projects.

Dr. Vimla Lalbhai is carrying forward the tradition established by her father-in-law    Mr. Kasturbhai Lalbhai and her husband, Mr. Siddharth Lalbhai. Under her able guidance, Atul Foundation is engaged in providing high-quality education, health, and medical assistance through a variety of initiatives, allowing and encouraging rural youth and women to achieve sustainable living opportunities, ensuring assistance for the poor, and improving their quality of life through infrastructure and protecting the environment through conservation activities. Efforts are driven towards uplifting the poor through pertinent programs so that they can live with dignity and self-respect.

Background of the project

Atul Foundation and BAIF Institute for Sustainable Livelihoods and Development (BISLD) envisioned the Atul Nutrition Garden project in four remote villages of Kaprada taluka, Valsad, and Gujarat, to improve nutrition intake by the villagers. The project intervention was based on the need assessment done in the villages taking into consideration pregnant | lactating women, adolescent girls, and households having children between the age of 0 to 5 years.

The need assessment revealed a glaring lack of proper nutrition among women and children. The selected villages had nearly 98% tribal population who were mostly dependent on agriculture and livestock rearing as a source of income, but the focus was primarily on the farming of crops that fetches good price in the market. The production was solely for income generation, and this failed to address food security and the need for basic nutrients among the villagers. The purpose of the intervention was to combat malnutrition and encourage people to grow vegetables for their daily consumption.

The project was implemented between July 1, 2020, and June 30, 2021, in which 1,000 participants were supported to develop nutrition gardens in their front yards or backyards, and 120 participants were assisted in the cultivation of creeper vegetables in their agricultural lands.

Impact:
Apart from the availability of adequate nutritious and organic food for consumption, the project proved to be an additional source of income for the families. The household expenditure on food reduced by almost 20-25% as families were using vegetables from their own nutrition gardens. Some of them were able to sell the fresh produce in the market as well. The participants who sold the produce in the market were able to produce nearly 3-4 kgs every 4 to 5 days, from which they retained nearly 1 kg for self-consumption and sold the rest in the market.

The vegetable production post-monsoon increased cropping diversity in the area. The villagers reported improvement in their health condition after consuming fresh vegetables from the nutrition gardens. The project also helped the beneficiaries avail various government schemes worth ₹ 14 lacs.

The overall experience of the participants is encouraging, and the beneficiaries have shown keen interest in growing more vegetables in the nutrition gardens.

The COVID-19 pandemic had a telling effect on the livelihood of people in the tribal areas. They were unable to move out of their villages in search of work and had limited resources to buy food for their families. It was during such a challenging time, that the Atul Nutrition Garden project proved a boon providing the villagers with sufficient nutritious food. It had also helped them to earn by selling extra produce from their farms at the village market. The availability of nutritious food helped them to restrict their movement during the pandemic, which indirectly prevented exposure to the virus. Knowledge building through the nutritional garden activity was one of the intangible benefits that helped the community build an understanding of the importance of a healthy and nutritious diet.

1.      Jayshreeben of Varoli village was engaged in rainfed agriculture and subsistence farming. Her family had to depend on purchases from local markets to meet their need for vegetables.

She started growing vegetables in her kitchen garden with the support of the Atul Nutrition Garden project, promoted by the Atul Foundation in technical collaboration with BISLD.

It not only fulfills the need of vegetables of her family but also is a source of extra income as she sells the surplus vegetables in the local village market. The kitchen garden has also provided her with an opportunity to feed nutritious food to her baby.

2.      Kantaben of Varoli village was growing rainfed crops such as paddy and pigeon pea. She used to grow vegetables in small quantities mostly for self-consumption in her backyard garden.

Kantaben started growing creeper vegetables such as bottle gourd and cucumber in about 500 sq m of land with the support of the Atul Nutrition garden project, promoted by Atul Foundation Trust in technical collaboration with BISLD.

Apart from the availability of nutritious food for consumption, the project proved to be a major source of income for her family. The production of vegetable posts in the monsoon also increased the cropping diversity and intensity of the area.

Atul Foundation is committed to fostering sustainable socio-economic upliftment, particularly in the lives of the underprivileged through relevant programs | projects.