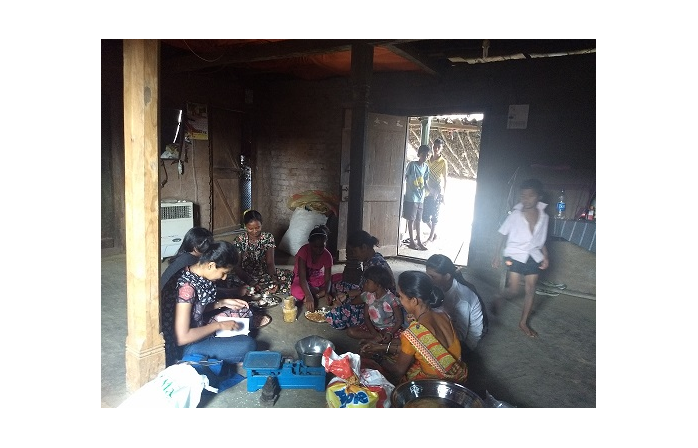 Natiya, a young girl who had been a city dweller her entire life and dropped out from her corporate life in Goldmann Sachhs and started to study Anthropology to find a meaning to her routine corporate life. Then, she began her fellowship with Youth For India, SBI Foundation wherein she started working with the women of Jawhar Block, Palghar District on Community Owned Millet Based Products Development.

She was able to sensitize a group of women and come out with a Laddoo Model. The model worked to address three major issues in the region:

Lack of a dignified source of livelihood in the area.

Lack of a fair price for agricultural produces.

These issues weree utilised symbiotically in the creation of the solution. The local agricultural produce of the region, finger millets were processed at the community level and made into nutritious ladoos by a group of Adivasi women - Khushi Nagli Snack Making Women’s Group which were then sold to organic companies and consumers in the nearby cities provided to the children of the village Anganwadis and primary schools as a healthy and nutritious snack under CSR and other govt. schemes created to address child malnutrition.

In addition to the ladoos, other value-added millet products like Sprouted millet flour were also sold. The women of the Snack Making Group work in the comfort of a common house in the village that has been dedicated exclusively for this purpose. Owning and managing the enterprise necessitates frequent visits to the bank, post office and other utility centres which has in turn resulted in a multifold increase in the life skills and thereby the confidence and self-worth of the women. The children of malnourishment programs who were served unpalatable porridges and other nutritive supplements enjoy nutrition in the form of tasty ladoos that are made from locally sourced and organic ingredients. Moreover, these ladoos are greatly preferred by urban consumers who are clean foods and who are unaware of tasty ways by which millets can be included in their daily diet.

The Adivasi women make use of the finger millets grown in their farms (which is generally offered a price not more than Rs. 15 if sold to the wholesale merchants) to make nutritious millet ladoos with other organic and locally sourced ingredients such as groundnuts, sesame seeds, jaggery, ghee, cashews and almonds. This product serves a dual role of a localised nutritive supplement to treat under nutrition and anaemia among children/adolescents (highly prevalent in most villages of Jawhar) as well as a healthy snacking option for those grappling from the issues of diabetes, obesity, etc. (predominantly found in cities). The millet ladoo as a nutritive supplement is quite contrary to fortified foods which are widely used to enhance the health levels of malnourished or overweight subjects, as finger millets are indigenous to the area both in terms of cultivation and consumption, making the ladoos more acceptable to the local palette. It also implicitly reiterates the need to stay in tandem with our ancestral practices.

The women have sold over 620 kgs of ladoos amounting to Rs. 1,65,000 since the inception of the activity. The group has a production capacity of 120 kgs per week presently. The number of members in the group are to be increased in proportion to the demand for the products in order to ensure that each beneficiary earns an ample amount from the intervention.

In the next couple of months, the women plan to set up a simple yet elaborate millet processing unit at the village level. With just a few machineries like a huller, oven, etc. The women will be able to increase their product range and thereby cater to a larger market. She also plans to sell products directly in the market under an exclusive brand name.

By the end of this year they hope to provide regular employment to at least 25 women from the village of Wanganpada, Jawhar after which this model maybe decentralised to other parts of the Jawhar Block.

Natiya has been shortlisted and felicitated for The Ladoo Model by the PIC's, National Conference on Social Innovation 2019

SBI Foundation is a non-profit subsidiary of State Bank of India and has been launched to undertake CSR activities of the SBI Group. SBI Foundation aims to be the leading institution for promoting growth and equality, responsive to the relevant needs of communities where it operates. SBI Foundation puts forth itself a larger aim of being a responsible Corporate Citizen, by contributing to nation building through CSR activities, in true letter and spirit.