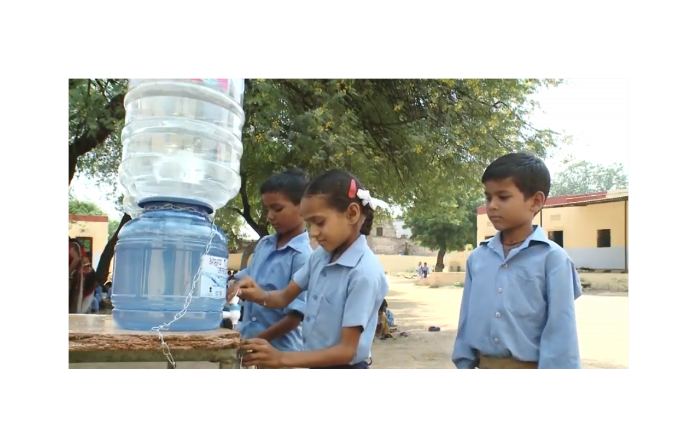 Rajasthan, India’s largest state by area is known for its dry and arid climate. Home to the Thar desert, water scarcity has been a major issue plaguing this state. This acute water shortage has affected daily life of people living here but what is striking is that it has taken a toll on young school going children.

Rathnangada Dasa, Akshaya Patra  says – ‘Some school had no arrangements for water, the schools which had arrangements, during my visit I noticed that the kind of tank that stored water was so horrible, and full of algae formation. We found that after eating the healthy food, the children still would fall sick because of the water.’

Infosys Foundation soon realised that this was a problem that needed to be addressed immediately. The Foundation partnered with Akshaya Patra to provide safe drinking water to these children under its program ‘Jalddhara’.

Ms. Sudha Murthy, Chairperson – Infosys Foundation says – ‘Around Jaipur, the water sources are not really good. They contain a lot of chemicals, a lot of unwanted minerals. So we thought, we will have  a plant of reverse osmosis and get good quality of water; a place like Jaipur though it is so hot in summers, children are not used to drinking water not more than 400 ml. When we gave ‘Jaldhara’, they wanted to drink water and also take it home so we said the best way, we will provide them water in the school and we also gave them water bottle they can take home and everyday they can come and fill it up.’

With a plan in place, schools were soon identified to receive hygienic and safe drinking water. The water was first filtered, treated and then bottled in large cans at a state-of-the-art manufacturing facility. These cans are transported to the schools where they were handed over to the school management. As the cans were used, they were replaced with new ones at regular intervals. The distributor of clean water to children soon had a positive impact.

Ms. Kailash Gerah, Teacher says – ‘After we received water from Akshaya Patra, the conditions have improved. The children are drinking pure water, their stomach ailments have reduced. They are also attending school regularly.’

Ravi, Student added – ‘The water that we get now is tasty and there is no fluoride content. Our desire to study has improved and we no longer have health problems.’

Though this program touched the lives of several children, many others still face the problem and that’s when the scale of operations was increased. The program is now extended to 1 lakh children.

This initiative by Infosys Foundation has not only resulted in considerable reduction of dropout rates in schools but also provided these children an opportunity to study in a more nurturing and caring environment.