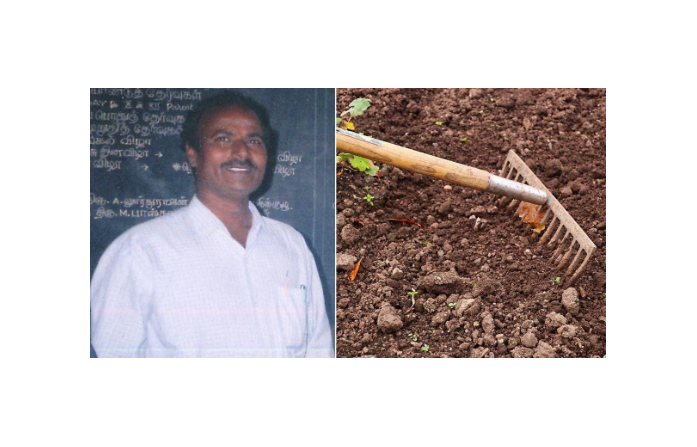 Land degradation is definitely among India’s most pressing environmental problems. Close to 30% of its geographical area is already affected. To make matters worse, according to reports, almost all Indian states have recorded an increase in degraded land in the past 15 years, with the most rapid increase being noted in the biodiversity-rich northeastern states.

Soil degradation can have disastrous effects such as landslides and floods, an increase in pollution, desertification and a decline in global food production. One of the biggest threats to our future food security is land degradation and the associated loss in soil productivity.

More than half of the degraded land in the country is either rainfed farmland, responsible for the food security of the country, or forest land that offers the best defense against climate change.

“Soil has memory and it will remember if you mistreat it,” says N Margasagayam (58), a resident of Dindigul, Tamilnadu. He has a doctorate in organic agriculture from the Gandhigram Rural University in Dindigul and grew up on land that has been farmed on for generations.

His father was a farmer and now, he, too, works at tilling away the land and protecting it. Growing up, he was fascinated by agriculture and always found time to engage in it.

“A major problem in agriculture is the overall decrease in the varieties of crops produced. In the early years of agriculture, farmers grew a wide variety of crops and raised many different types of livestock. Since the development of industrialized agriculture, the number of different types of crops and livestock has decreased. This decline in variety is because it is cheaper to produce large quantities of the same type of crop or livestock than to produce smaller batches of multiple types,” says Margasagayam.

To ensure the quick production of these crops, farmers use chemical fertilizers and other growth enhancers. This not only affects the produce but also poisons the farmland. Over time, Margasagayam learned that wrong farming practices can turn a fertile lush land barren.

Almost a decade ago, Margasagayam had the opportunity to attend a lecture by scientist and organic farming crusader G Nammalvar. He says it was very inspiring and changed the course of his life.

After the program the attendees were taken to an NGO, Low External Input Sustainable Agriculture (LEISA), in Keeranur of Pudukottai district. Margasagayam stayed there for 10 days and got exposed to the nuances of organic farming.

This visit led him to over two decades of raising awareness about organic farming among students and farmers.

In 1998, he went to complete his doctorate and decided to start an NGO called the Green Trust. The NGO mainly focuses on Vellore and has conducted several awareness programmes for farmers, organized on-field demonstrations on how to prepare natural fertilizers and taught them how to be self-reliant without depending on chemical fertilizers and pesticides.

The same year, while he was working on creating awareness about organic farming, the government roped him in and made him a working member of an Eco Club, which was aimed at creating awareness about environmental issues among school students. Under the club, five major industrial towns were selected and Margasagayam was deputed to his home district of Vellore, one of the major industrial towns affected by chemical effluents from tannery units.

He has also worked towards protecting the environment. Organic farming is a way of life for him. Recognising his works, the Tamil Nadu State government honored him with the Green Champion award in 2021, along with a cash prize of Rs 1 lakh.

Today, Margasagayam believes every farmer should switch over to organic farming as it is the way forward. Lowered use of chemicals and shift towards sustainable solutions will provide nutritious and safer food while maintaining an ecological balance, he says. He wants this organic method to be imbibed into the grassroots by educating farmers and even the young generation. He has conducted awareness campaigns in 40 government schools. For his work, the State Higher Education Department’s Tamil Nadu State Council for Science and Technology wing honored him with the Popularization of Science in TN Award in 2001.